One of the main ideas from the shadow system is one image can represent two 2 card pairs. An example is below: 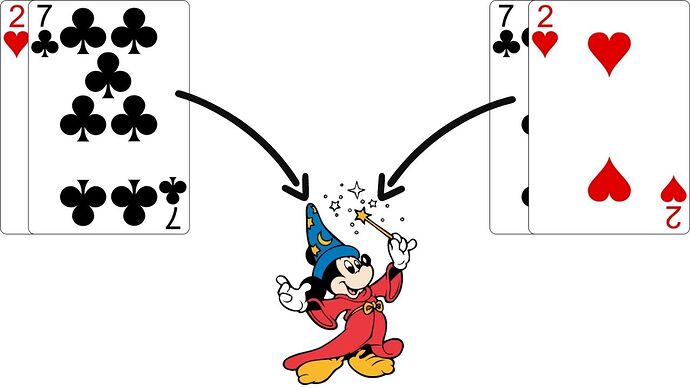 2 of Hears/7 of Clubs and 7 of Clubs/2 of Hearts are both represented with the image of Mickey Mouse. With the Shadow System, you would need only 1352 images instead of 2704 images like a traditional 2 card system would have. I managed to apply this idea of one image representing two 2 card pairs to my Modifier 2 Card system!

Originally you would need 169 images for all the card values but using this idea from the Shadow System, I get the total images for the face values down to 85 images!! Now there is not a rule on how you double up for each image on the card combos. I took a logical approach to combining the card value combos.


I wanted an easy way to distinguish between the two 2 card value combos which is very important when you are actually memorizing. I decided to pair the value combs together based on low values and high values. If you see my excel sheet, you can see all the card values that start with an A have a counterpart combo where the card values start with a K.

I decided to still follow the rule of low and high values going together for the 7 value combos. Looking at the second value in the card combo, you can see for the 7’s that the A still goes with K, 2 with Q, 3 with J, and so on. The only exception is the combo 7 7. This combo doesn’t have a counterpart combo so one image would only represent the 7 7 combo.

Let’s take AA and KA. The image of Darth Vader would represent both images. You can create an image based on either of the value combos: 11 (AA) or H1 (KA). In this case, Vader comes from the AA combo since that can be translated into 11. The next thing you need to figure out is how do you know which combo the image represents when memorizing?

How To Memorize With Low and High Values

The other aspect of the Shadow System is when you memorize a deck of cards, you would keep placing images in a single location or change the location depending on the color of the suits. This is the key to telling which image represents which card combo.


Here is my post on the Shadow System if you want to see how the color of the suits determines the image placement: The 2 Card Shadow System

The main idea here is you need a system on how you will distinguish between the card value combos when memorizing. If you paired the combos base of low and high values as I mentioned above, you will have an easy way to tell the difference. Here are the rules:

To do a quick recap, low value combos are in the same location, and high value combos end the images in that specific location. There is not a set amount of locations you will need to memorize a deck of cards since it depends on the combo values.

If you have nothing but low value combos, technically all your images would be in one location so 26 images in the location. On the other hand, you can have all high value combos which means you would use 26 locations. These situations would rarely ever happen but are still possible, but I recommend having card palaces with 26 locations so you are covered no matter what value combos you get.

An issue that can happen with multiple images in one place is you lose track of the order of the images which means you would recall the cards incorrectly. It all comes down to personal preference here since there is not a magic number of images per location that always work.

Alex Mullen talked about how he had to make breaks because too many images were going into one location, he would naturally remember where he broke the images up. You can do the same thing as Alex or you can create some indicator to let you know you did a break.

The Shadow Modifier System needs 101 images and so far I only mentioned how to create 85 images. So where do the last 16 images come from? The last 16 images are the modifier images from the 16 suit combos.

I have not used this system yet and I am not sure if I will switch from the Modifier 2 Card System to the Shadow Modifier System. I would love to hear any feedback on the system and if people use it. I think it is an interesting take of making a 2 card system with the least amount of images.

I can see already that this system might be best for speed cards or a few decks because of how many images there are. With more decks, you have the chance of getting more image repetition. This is the trade-off for having fewer images in a memory system. Personally, I rather have this issue than creating 1000+ images haha