I created a brand new 2 card system that is based on a system Jan created (at least I think it was him and his system. I can’t remember haha I will link to the system if I can find it). I haven’t seen this exact system before. The system I created is very simple and only takes 185 images to complete and took me over 4 hours to create!

The links for the videos describing the system are below if you want to watch me explain the system. But I am including an explanation and the coding for the system here for those that would rather read about the system.

Taking 2 cards at a time

When you look at traditional 2 card systems, you are creating images for all the 2 card pairings like Ace of Spades and 7 of Hearts. If you create a 2 card system this way, you would have 2704 images you have to create which is a lot!

But 1352 images are a lot of images to create and the coding behind the system is not easy to create images with. I tried to create a 2 Card Shadow System, but I was getting stuck on finding images that fit the system’s code. I put a ton of hours into the system and don’t even have half of the 1352 images done!

These are the reasons why I tried to think of another way to create a 2 card system and tried to put ideas I have used and others have used together. This is how I created the Modifier 2 Card System! To see how this system works, let’s take a look at the components of a 2 card pairing. 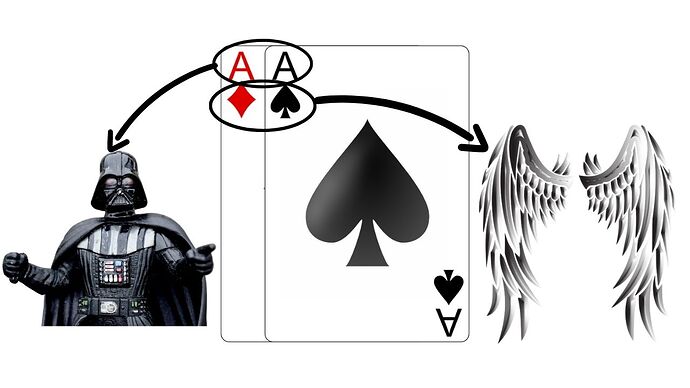 When you have 2 cards, you actually only have 2 components to the cards: the value and the suit combo. These two simple components are the secrets to making a simple 2 card system without having over 1000+ images. In fact, you only need 185images for a 2 card system! 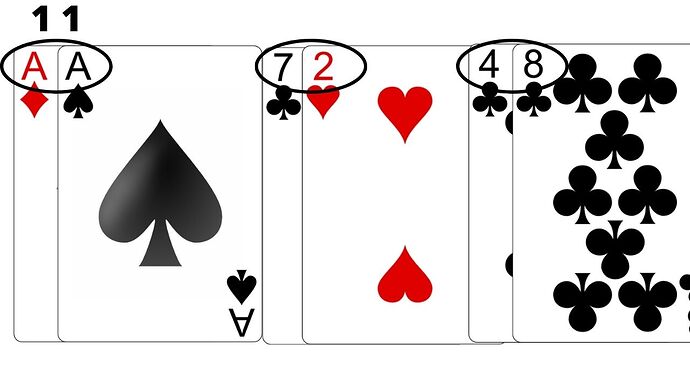 The other way to get your images is by creating a coding system for the values like the major system. This is what I did when I first created the 2 card system. The letter coding I used was the following:

If I had A 10, the coding is T then Z which would be the image Taz. I gave myself more options with the code by allowing the letters to start and end the word or using the sound of the letters. For example, I could use Dogs for A 10 because it starts with a D (A) and ends with an S (10) but if you strictly use the major system, this would be A (D) and 6 (G) since the G comes before the S in Dogs.

At the end of the day, you can make any rules for creating images with the code that make sense to you. I just wanted more options for images so I could have images I liked and not be forced to use an image just because it fits the code.

The great thing about creating the Modifier 2 Card System with the major system as your first system is you get a 2 digit number system out of it! You then need to create only 69 more images to have a 2 card system. The last 69 images have to deal with the face cards.

The face card in the 1st position is just like the regular number values. I picked the letters that haven’t been used and would give me a good amount of image options. The only connection I made was Q looks like O but for the J and K, I just forced the connection between the letters.

The face card in the 2nd position has the corresponding vowel sound or those letters in the word. You don’t have to do this and can stick with having the face cards being a single letter then combining them like in the major system. This makes the image creation simpler, but the only thing you might struggle with is images that end with A, O, and H.

The reason why I had vowel sounds for the face cards in the 2nd position is that I ended up using my 2 digit PAO number system. I was using people and objects so there isn’t a letter organization like 3A to 3K would all start with M. Having the vowel sounds gives me a way to create my images with some system behind the images.

When it comes to creating images, you need to do what makes sense for you and allows you to create images easily. The Shadow System made it hard to create images because of how specific the coding was. You can change the letters in the Modifier 2 Card System as long as the main idea is still there.

The last part of the system is the suit combos. If you take all the combos for diamonds, spades, clubs, and hearts, you get a total of 16 different combos. All you have to do is create 16 images or more specifically 16 modifiers. 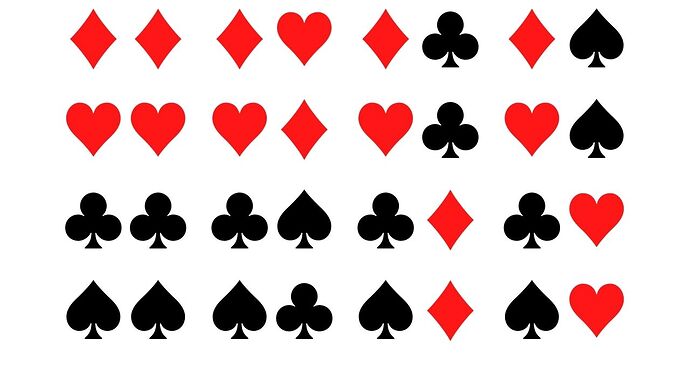 What is a modifier? A modifier is an image that changes the way another image looks like. You can have 2 images like dog and chair. Adding the chair to the dog doesn’t change the way the dog looks. At this point, you would just have the dog and chair interact. A modifier doesn’t necessarily interact with the image. You see the modifier as part of the original image.

Modifiers can be a cape, helmet, afro, big shoes, and so on. Imagine Big Bird. Now see Big Bird with an afro. The appearance of Big Bird has been modified by the afro. This is important to understand because you don’t want another regular image as a modifier.

The way I created my modifiers for the suit combos was by picking any modifier image to go with a suit combo. There really wasn’t a connection between the suit combo and the modifier.

is a tail just because I wanted it to be.

The reason there was no modifier code for the suit combos is because I wanted to have unique modifiers and not be limited by a code. I do have to use rote memorization to learn my modifiers and what suit combos they belong to.

Take the modifiers afro, hate, mohawk, and helmet. All of these go on top of people or objects. So when going fast, I would get confused about what modifier I saw on the head or on top because I have 4 modifiers that would easily fit this position. Sticking to a code could force me to pick similar modifiers just because they fit the code.

But you can use some sort of code for the suits to get a more systematic way of creating the modifiers and here is how you can do it. You can give the suits a specific letter as you do to a digit in the major system. You can use the starting letter for each suit at the code letter.

Then you would need an image with the specific letters when you have the suit combo.

Even this example was hard to get modifiers for and not just a regular image. A Hanky (handkerchief) could be stuck in the object or a person’s shirt. A person or object can be covered in doo-doo (poop haha). From the letter positioning in the modifiers, you will be able to get back to the suit combos.

The letter code for suit combos helps you learn them faster, but you might struggle a lot with finding the modifiers that fit the code or even wanting to use the modifier you come up with. At the end of the day, it is up to you how you create the modifiers, but you only need 16 so it isn’t so bad!

I have only done one trial with my new system that went... uh ok haha I originally created 100 new images for the number values using my major system, but I kept reading the images from my 2 digit PAO number system instead of the new images. So this is why I decided to use my PAO system to avoid this issue.

I am really excited to see how far I can take this system! Plus I don’t have to create over 1000+ images which would have taken months to finish and even more months to learn. I think the Modifier 2 Card System is a game-changer because you can finish it in a matter of hours then start training with it!

Let me know what you think of the system!